*Pictured Above: The newest in hipster invention and originality –
The PBR Lamp.


According to new research conducted by the fine folks over at Restaurant Sciences, prices of cheap beer are spiraling out of control. The reason? Pabst Blue Ribbon beer!

They are the reason why “sub-premium” beer prices in the city have climbed 9.4% in the last seven months, say Restaurant Sciences, which tracks food and beverage sales nationwide.

Yes, my friends, it’s finally happened! In the ultimate hipster irony, PBR has actually become too popular and mainstream! Other beer companies are now actively seeking to price themselves out of your wallet. America’s former favorites are taking their business elsewhere. To a new target market, one that actually has ten dollars in cash, not just on their parents debit card. No longer can a fresh college grad, simply put down his McDonald’s name tag and picket sign out on the street and grab a cold one.. Or even a warm one! Sorry Corona fans. 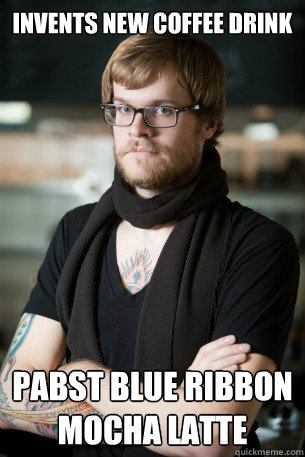 Dat poverty life is no doubt correlated to drinking can after can of PBR! 100% Foolproof my friends! Imagine, there you are a young lad suckered into drinking beer out of a can by your bearded ‘friends’. Before you know it, you yourself are donning a trucker hat, haven’t shaved in weeks, and getting mistaken for a hobo on a daily basis.

Young and impressionable you were, and just like that PBR becomes the only thing you can afford. You’ve been priced out of the market, suddenly you can only work jobs that can pay for your PBR. Since bars that sell PBR aren’t going for the high-end clientele, you meet a similar PBR wife at your new job as a PBR barback. She’s a little pudgy and her boobs are sagging all over the place, but in your PBR haze you don’t know any better. And then the time comes.. Your wife gives birth to a future hipster. Fulfilling the cycle of life. The hipster life. The horror. The unspeakable horror! 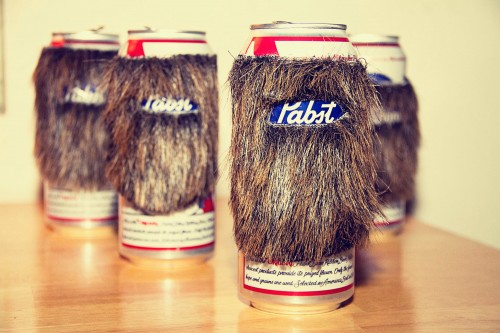 According to an interview by leading scholarly paper the New York Daily News, the reason for PBR’s popularity is due to mainly one sole reason! Let’s take a look at what the Daily News’ finest uncovered. The infamous bearded facts with legendary local bartender Sam Rio:

PBR sells for $2 a can at the popular Welcome to the Johnson’s bar on the Lower East Side.

There you have it! It may taste like PBR, but the cost is slightly less or equal to most consumers working wages. 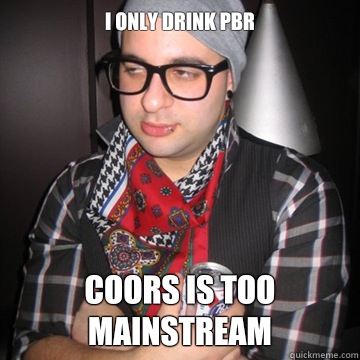 PBR’s surging popularity has lead to complete economic disaster for students who once fathomed dreams! Dreams like affording a bottle of Stella Artois. Gone are the days when a young lad could just hop out with a 4 year degree and expect to purchases the luxuries in life!

“I believe the single biggest driver in sub-premium beer price increases is indeed specifically PBR,” said Chuck Ellis, who heads the research company. “It has become quite fashionable.”

Ellis reached that conclusion after his researchers tracked beer prices at 500 bars and restaurants across the city.

Researchers reason that since PBR has “become quite fashionable,” restaurants and bars feel justified charging more for it and other standard non-craft brews.

Best forget that Heineken and start saving up for a Corona… And even that is not safe. Or guaranteed. It’s time for a call to action! It’s time to Occupy Williamsburg!! We’ve suffered for way too long, my friends! Viva La Revolution! 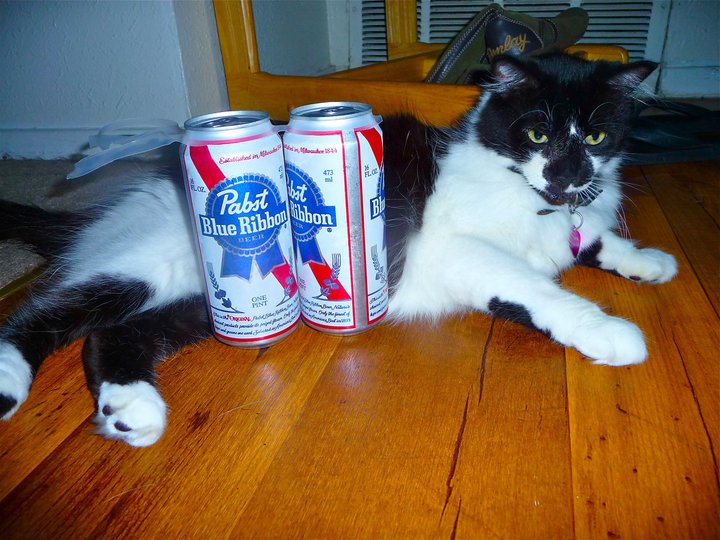 *Above cat was more masculine than a whole generation of hipsters. No beard needed.

This site uses Akismet to reduce spam. Learn how your comment data is processed.

Next post: Diana Nyad Swims from Cuba to Florida at Age 64